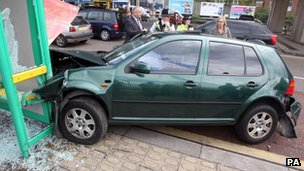 More than 1,000 children a month are being injured on local roads around British schools, insurance industry figures indicate.

Insurers also say 37% of local school areas had at least one child road injury each year from 2006 to 2011.

The government said the data was crude, road deaths were at a record low and the number of children injured had fallen considerably in recent years.

Insurers are launching an online tool for parents.

The online index has been compiled by the research group Road Safety Analysis and Axa Car Insurance, who say it will help parents understand “the risks associated with the roads around their local schools to keep their children safe”.

The website will show how many vehicle collisions, including those involving children, have happened within 500m (a third of a mile) of the school gate.

The tool draws on data from the past six years, which the backers say shows there were 85,814 child injuries on roads within a 500m radius of schools, the equivalent of 1,190 a month.

Only one in five schools had no children injured in accidents within that distance over that period, the researchers say.

Separate figures used by the site also suggest there were 557,200 vehicle collisions around schools in the period 2006 to 2011, the equivalent of six collisions per school per year on average.

These collisions included any incident reported to police involving any vehicle on a local road, including those that did not result in injuries.

Some of these accidents were in the school holidays and child injury numbers do not necessarily refer to pupils at that particular school.

The website suggests the top area for collisions in the six-year period was London, which accounted for 13% of the child casualties nationally and 22% of collisions overall.

Looking at cities with more than 100 schools, excluding London, the figures showed that from 2006 to 2011 Liverpool had the highest number of road injuries (deaths, serious injuries and slight injuries) around schools, followed by Nottingham, Manchester, Birmingham and Leicester.

Road Safety Analysis director Dan Campsall said: “Translating this wealth of data into something that is meaningful for parents, teachers and community leaders has its challenges.

“However, it is important that these groups are able to understand the immediate road risks around their local schools if they are going to work effectively to secure safer communities for children in the future.

“The data can be used to support changes in local road safety education as well as the road environment, therefore helping to further safeguard pupils across the country.”

Government figures show that in 2012, a total of 2,272 children were killed or seriously injured on Britain’s roads – down 6% on the previous year.

Over the same period, the total number of “child casualties” in Britain was 17,251 – down 11% on the previous year.

Road Safety Minister Stephen Hammond said: “Road deaths are at a record low and child casualties have fallen considerably in recent years but I am determined to make our roads even safer.

“That is why we are improving road safety education resources for schools, making it easier for councils to put in place 20mph zones on their roads and are increasing fixed penalties for offences such as driving while using a mobile phone from £60 to £100.

“By combining education, enforcement and engineering measures such as these we will continue to reduce deaths and injuries on our roads.”

Earlier this year, the government launched its own website to give people local data on accidents in their local areas.

More on This Story